I don’t recall how it came up in conversation, but the other night I found myself asking my co-workers if they knew who Kate Smith was.  I was a little surprised to find out none of them (mostly much younger than I) had never heard of her. 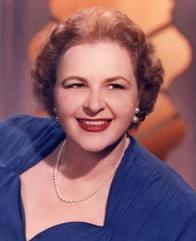 Now, to be honest, since Smith retired from public life when I was still in high school, I must admit I am only familiar with her because of my enjoyment of television variety shows.  Not something your average teenager indulges in.  In fact, they are a relic of the younger days of television. Before I became familiar with her from her appearances on shows like those hosted by Dean Martin and the Smothers Brothers, she had a lengthy career as a recording artist and was one of America’s most popular radio personalities – having top variety and news/commentary programs.
Kate Smith had a big voice, not one you would ever forget if you had once heard her sing.  She is most famous for making famous what Irving Berlin called his most important song:
That song was also to be the last one she performed in public, during bicentennial celebrations in 1976.  After that, she retired from public life.
Even though she was gone for 15 years when terrorists attacked on 11 September, 2001 — that afternoon, as the terrible reality began soaking in and I realized that there were people on this planet that hated this country so very much they would commandeer full commercial airplanes and fly them into a pair of skyscrapers in New York City, the Pentagon and attempt a fourth attack on the White House — that afternoon almost more than anything else I wanted to hear Miss Smith sing, “God Bless America”.
Smith, in addition to her recording, radio and television work appeared in 7 movies herself and her voice is found on the soundtrack of 19 more, according to IMDB .  So, even though you may not know her name, you may have heard her voice.
Go to YouTube and IMDB and get to know this American Icon.