The Independent Lens/Half the Sky movie premiered on PBS this week. The movie is the outgrowth of a movement sparked by a book of the same name from NYT columnist Nicholas Kristof and his wife, Sheryl WuDunn.  I review the book here.  As I show in my review, the book is flawed by the premises of its authors who are staunch abortion rights supporters with a prejudice against Christianity.  Their aim is more than simply admirable but their approach is so flawed that their work and the organization cannot be commended to Christians.

In spite of this, the Half the Sky phenomenon has been heavily promoted by Carolyn Custis James (echoing it in the title of her own book, Half the Church) who invited WuDunn to speak at the last Synergy conference and has used her blog and twitter feed to regular promote the Kristof/WuDun work.  Half the Sky has also been promoted by Bill Hybels and Willow Creek who turned over all three services one weekend this past May to an interview with Kristof (my reaction and video of the event available here). Willow Creek also had WuDunn speak as “faculty” for their summer leadership institute.  While Kristof is more widely known as a NYT columnist, WuDunn is every bit as dangerous to the health and well being of women around the world as evidenced by her TED talk linked in this post . In that talk, WuDunn peddles the repeatedly discredited overpopulation myth while also advocating the putting aside of morality for pragmatics in “helping” women. Putting together the overpopulation myth with education advocacy, it becomes clear that WuDunn thinks the best way to help women is to ensure they have fewer babies.  Never mind that the overpopulation and  “reproductive rights” that WuDunn supports have overwhelming victimized (before they are even born) the littlest women on the planet to the point where demographers estimate the number of missing girls may be as high as 200 MILLION.
Even though I knew many Christians had been shocked into indignation by the atrocities Kristof and WuDunn reveal, in preparing to watch the documentary I was caught up short when I noticed on the bottom right corner of the page listing sponsors that World Vision is a featured partner of the Half the Sky Movement: 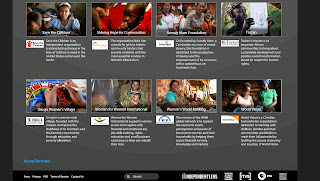 Holding onto a bit of disbelief, I telephoned World Vision and was asked to email them my concerns.  I sent an email including many of the same links I am including in this blog post here. I also contacted some friends for feedback, one of whom responded to World Vision with a letter of his own (he is a pastor, theologian and missionary in Africa who well knows the devastation and abuse that western aid agencies with a pro-abortion/birth control agenda visit upon women they deem in need of their help). My concern is not simply the abortion agenda, for I understand there are legitimate projects upon which Christian groups can work with secular groups without compromising the pro-life beliefs of the Christian group.  But this is not simply a limited cooperation for a particular project, this is a major partnership which World Vision is promoting on their own web site.
By doing so, World Vision is not simply partnering with a new movement, they are partnering with the partners of Half the Sky as well. Other partners include Marie Stopes International and Center for Reproductive Rights the former is a major international abortion provider and the latter an international advocate for uninhibited “reproductive freedom”. The abortion/overpopulation agenda is neatly tied together by having the Gates Foundation as a major funder .  Melinda Gates, you may know, has created some controversy by claiming there is No Controversy in contraception.

Because of these concerns I have outlined above, it was with deep disappointment and sadness that I received World Vision’s response to my concerns.  I include the body of their response here (excluding a few words of greeting and closing which are particular to my relationship to them and past sponsorship).  Please take note that, while they assert their pro-life views, they both defend their partnership with Half the Sky as well as making positive references to family planning:

World Vision is one of 32 partners with Half the Sky, and some of these groups may approach maternal health and family planning differently than World Vision. However, we are working together toward a common goal to help women and girls reach their God-given potential in a world that would allow them to freely live, work, and express themselves. As World Vision addresses serious issues that affect the poorest of the poor, we belong to advocacy and technical networks that may include groups with whom we disagree on theological grounds or certain issues. This does not mean we endorse their positions on other issues or support these organizations. However, we are working toward the same goal, which is preserving lives and advancing the cause of those in need.

We share your concern for the well-being of all children, including those in their mother’s womb. For more than 60 years World Vision has been working to save the lives of these children who are so near our Savior’s heart-not only to save their lives, but to break the cycle of poverty so that they, their children, and their children’s children can live healthy, productive lives.

Please be assured that World Vision inexorably opposes the use of abortion, as it runs contrary to everything for which we stand. All of World Vision’s efforts seek to save, extend, and enhance life. World Vision’s policy denies the use or promotion of abortion as a method of family planning in any of its projects.

World Vision’s survival programs have saved countless lives of children and their mothers. Through improved nutrition, diarrhea control, expanded immunization, and birth spacing, families are healthier and more of their children are surviving the first few perilous years of life.

We are concerned that much of the progress we have seen in the lives of mothers and their children might be reversed if families do not have access to maternal education on topics such as birth spacing methods and prolonged breast-feeding practices. Children born to mothers who are too young or too old have a diminished chance of survival. The health of the mother and all children in a family is affected when births are too close together.

World Vision believes that life begins at conception and encourages family planning programs, that are proven not to be abortive in nature, in areas where the programs are desired by individuals and acceptable to both the culture and government of the region. World Vision faces challenging issues of economics and culture in its sponsorship communities around the world. Our aim is to ensure the survival of each child through community development and health efforts. We believe family planning and child spacing are only part of our efforts to enable families to enjoy healthier lives.

Nearly half a century ago, the papal encyclical Humanae Vitae fell like a bombshell on the Catholic Church as well as the wider world.  It was widely ignored, condemned and a year later termed a dead letter.  And yet the intervening decades have shown that the four broad predictions Paul VI made have come to pass.  One of them was the prediction that there would be a coercive use of reproductive technologies by governments.  Here is just one example of US foreign aid being tied to family planning.  In this, governments and foundations such as Gates work together to promote abortion, sterilization and birth control. It is not a beast you can tame, thinking you have forged a relationship of trust — and then turn your back on it.
Because of this, I have informed World Vision that I will not be sponsoring another orphan.  In fact, I will not knowingly give them one thin dime of my money so long as they are partnering with groups promoting practices that harm women, men and their children.
I urge you to consider doing the same.  Contact World Vision and tell them you will not support an organization that joins hands with the Culture of Death.